The main character in Mind the Gap, Richard Grey, grows up from childhood to young adulthood, and he’s doing the rounds of various authors, building up a store of perceptions and attitudes and lines of inquiry, trying to fit them to his own life. You have this roller-coaster ride between the ideal and the real, the imagination and reality, desire and catastrophe, all the way through.

One special author inspired me, and I don’t mention her in the novel: Virginia Postrel, author of The Power of Glamour.

Richard sees life as flat images projected onto a personal screen. It’s pretty clear what the screen is when you look at the book cover: I’m not going to provide an executive summary, but poor Dick grows up wearing a gas mask, for goodness sake!

Virginia Postrel writes: “Glamour is a beautiful illusion – the word ‘glamour’ originally meant a literal magic spell – that promises to transcend ordinary life and make the ideal real. It depends on a special combination of mystery and grace. Too much information breaks the spell.”

Richard sees girls and then women, obscurely, through the fog of his impressions, as images of desire rather than as real people. He’s caught up in the “ideal real” – the magic of unattainable desire, even to the point where the distortions of his dreamscape loom large over his daily experience.

Doesn’t some kind of distortion shape our own perceptions?

But in his case, circumstances jolt him out of the spell. 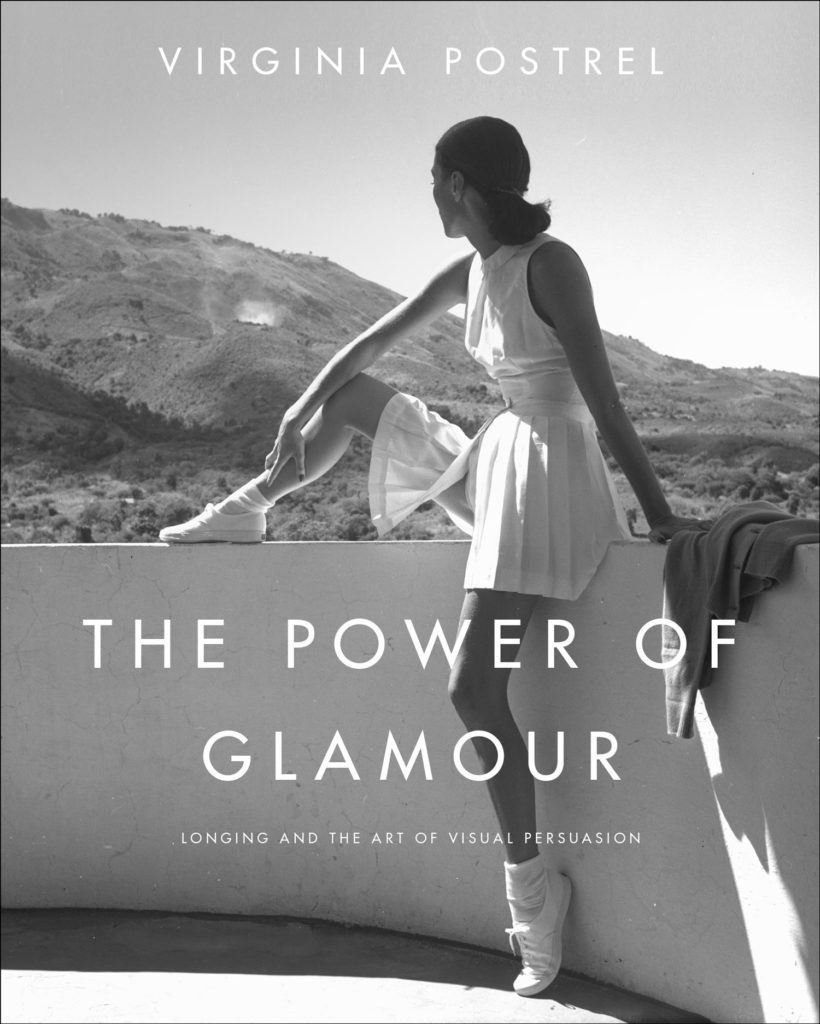 Virginia Postrel taught me about the shimmering, glimmering power of illusion. She writes: “glamour is an illusion ‘known to be false but felt to be true,’ which focuses and intensifies a pre-existing but previously inchoate yearning.”

When we yield to the power of glamour, something in us accepts the make-believe of momentary transcendence, as if the glamorous person, in being captured on camera, were acting on our behalf, were representing us, drawing out, embodying and exemplifying our own unfulfilled hopes. Glamour frees us, for a moment, from ourselves.

I actually reached out to Virginia Postrel in February 2018, when researching the feature-length version of my film, The Blinding Sea.

She mentions in her book: “From the days of biplanes and silk scarves, the aviator has been the archetype of masculine glamour. Aviators have personified national ideals, from French élan to Soviet party discipline. They’ve inspired lust and admiration. They’ve turned sunglasses and short, utilitarian leather jackets into fashion statements.”

Roald Amundsen was a pioneering aviator in the 1920s. Naturally, I asked her whether polar explorers of Amundsen’s era were glamorous.

She wrote back that polar explorers a century ago were considered “glamorous figures, with a bit of romance thrown in when contemplating some of their hardships–although I suspect most people assumed that these guys didn’t suffer like normal people when cold, hungry, exhausted, etc.”

In 1928, Amundsen disappeared mysteriously, without trace, during a polar flight: but he was never treated as a tragic hero, after the fact. He remains to this day a glamorous figure. My film is all about reaching beyond the power of glamour to discover the person he really was.

Virginia Postrel has written an insightful, ground-breaking study of glamour which has changed the way I see things, and influences both my fiction and non-fiction.

A Vortex of Delusions