I have magical-realist novels on my mind, so it is fascinating to consider how people in times past transformed real places in the world into mythical places against a backdrop of faith, speculation, incomprehension and storytelling.

An example: the island of Vulcano, in the Aeolian Islands just north of Sicily. I took the picture at the top of this blog, while hiking to the summit of Vulcano, which is not particularly high (501 metres or 1644 feet), although the view down into the fuming crater is spectacular.

For the ancients, this was the Mouth of Hell, where the Greek smith-god Hephaestus forged iron tools. (He also had a workshop inside the larger volcano Mt. Etna on the island of Sicily.) Here it was that Hephaestus made the iron net he used to entrap his faithless wife Aphrodite and her lover Ares, and drag them to the top of Mt. Olympus, casting them in ridicule before Zeus. Picking up where the Greeks left off, the Romans gave a new name to Hephaestus, calling him Vulcan, and giving him responsibility for fire, metallurgy, sculptors, volcanoes, artisans and technology. Here it was, they claimed, that Vulcan forged the thunderbolts of Jupiter (the Roman name for Zeus).

Writing in the 7th century AD, Adomnán of Iona, an Irish abbot, describes Vulcano as the Gate of Hell, which he contrasts with Jerusalem, the Gate of Heaven … so there is a kind of fearful symmetry in these two places, when taken together. According to Adomnán (apparently echoing the 6th century pope, St. Gregory the Great), Vulcano thunders continuously, the crater blazing with fire by night and belching forth smoke by day, although the volcano is more active on Fridays and Saturdays, recalling the suffering and death of Jesus Christ, just before the resurrection.

A few mountains around the world are considered Gates of Hell, but I like Vulcano the best, and the mud-baths there are great fun.

A word of warning: volcanologists wearing gas masks sometimes do sampling at the summit, and have placed barriers and signs warning hikers that breathing in volcanic gases can be fatal.

Even so, I have seen a few hikers willing to risk all for the ultimate selfie … right at the very lip of the Mouth of Hell. 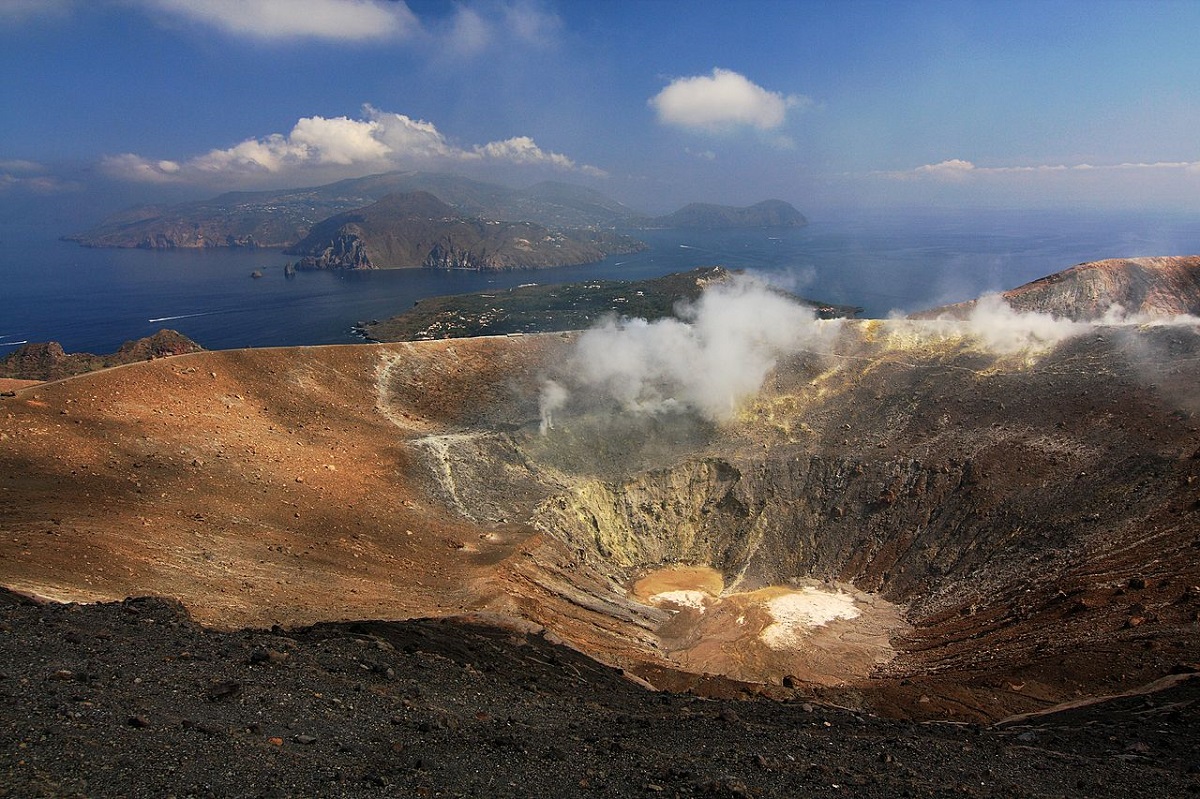 A Chat with Northrop Frye